Awards season officially came to a close last night as the world gathered to watch the 2020 Academy Awards Ceremony. Hollywood tightened their bowties and slid on their shiny glass slippers with hopes of being able to come home holding a shiny gold statue.

Going into the show, there was already disappointment amongst celebrities and audiences alike. Why? Because there was a strong lack of white, male representation.

Oh, right, that’s all there was! Tensions were high on stage and the red carpet as groups felt neglected when it came to being represented for their work. However, even though categories like Best Director opted out of female representation, the rest of the show sure didn’t. At least, that’s how it seemed.

From the red carpet all the way through Best Picture, females were dominating screen time. Sure it wasn’t taking the stage to make history, but it was a subtle reminder that we’re here, we’re pissed, and we won’t let you forget it.

Here’s how I think females still made their mark on the 2020 Oscars: 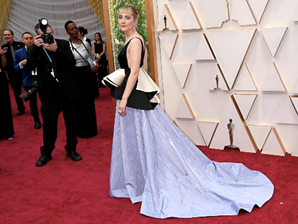 Time to say sayonara to that custom Versace. Celebs like Kaitlin Dever, Saiorse Ronan, and Margot Robbie all went for an eco-friendly option this year, reaching for either vintage or remade dresses to show their concern for the planet. 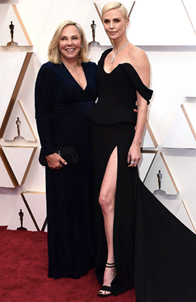 Single or not, there was one date that quite a few celebs opted for this year: their momma. Stars like Keanu Reeves, Laura Dern, Brad Pitt, and Charlize Theron all opted to bring their mother as their date this year, with Laura Dern even saying ‘they say never meet your heroes, but I say if you’re really blessed you get them as your parents.’ 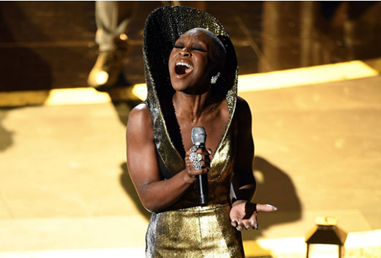 Janelle Monet! Chrissy Metz! Idina Menzel and fellow international Elsas! First female conductor at the Oscars, Eimear Noone! These amazing women took the stage to perform a beautiful piece from a film, in what seemed to be a (mostly) all-female performance lineup. There might have been a male or two, who knows.

Natalie Portman embroidered her Dior cape with all of the female directors who weren't nominated for #Oscars. Check out her explanation here. pic.twitter.com/kyyo2wVMZf

Natalie Portman didn’t choose sustainability this year, she chose rebellion. The former black swan wore an impressive cape embroidered with the names of females who’s work wasn’t acknowledged at the awards this year (like Greta Gerwig, for example) because, well, it’s bullsh@t. Does that come in my size, Nat?

5. “All Women Are Superheroes!” 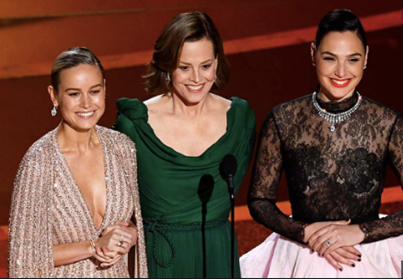 Sigourney Weaver, Brie Larson, and Gal Gadot took the stage together last night to announce Best Original Score. Before doing so, the three joked about starting a female fight club where of course men are welcome, shirtless of course. The catch? Losers have to answer the infamous question of what it’s like to be a female in Hollywood. Sigourney says you don’t want to lose.