The robot has already started serving at a restaurant in Seoul.

A few years ago we kept hearing that machines are the future. It appears we’ve jumped into the express lane of life, as the future is now. You may think you’re irreplaceable after listening to Beyoncé on repeat but it seems these robots are out to burst your bubble.

While automation has been a thing for decades now, we’re starting to see it more and more throughout our daily lives then ever before. Tesla decided you don’t need human drivers to make cars move from one place to another and now we have machines doing what you would not have expected, serving food in a restaurant. Bye bye, waiters.

A restaurant, in Seoul, that serves Italian themed food recently unveiled their robot servers that will deliver food to tables. With corona virus still lurking around, they were trying to find a way to keep up with safety measures while still serving their customers. What better way to do that than by getting rid of all the extra people in the restaurant, right? Well, the restaurant did just that and replaced the human waiters with robots to be able to offer top notch service while still maintaining social distancing rules.

The robot delivering food to customers in this restaurant goes by “Anglio Kim“. The system is quite automatic. Customers order through a touch screen table first then Anglio Kim brings the food to their table. The robot uses Artificial Intelligence and is fitted with a SLAM (Simultaneous localization and mapping) capability that will help it move across the room without bumping into things or people.

You may be wondering what this robot server looks like. Does it have arms and legs? Does it talk? Will it laugh at your not so funny jokes when it brings food to your table? Well, the robot looks like a trolley- literally. It has food trays that can hold up to 30 kilograms, an LCD screen and a speaker. 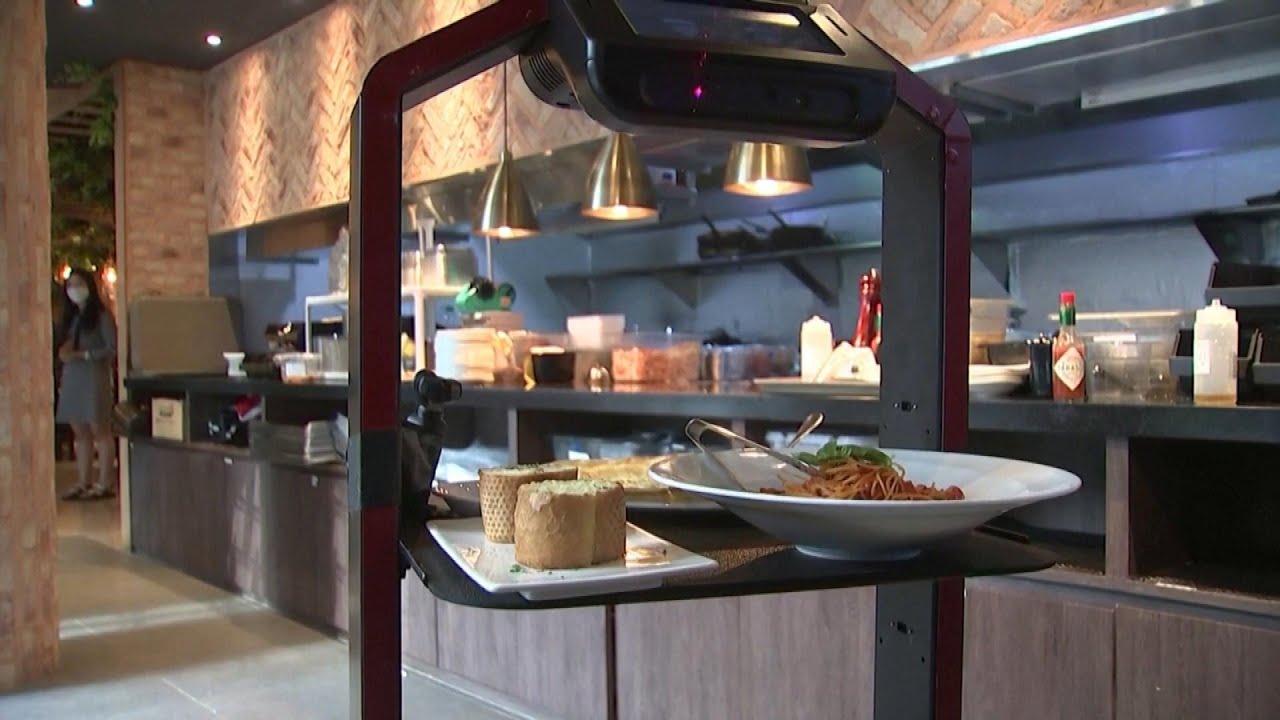 The robot can speak in English and Korean which means you can try strike up a simple conversation as it brings food to your table. While a robot serving food may seem like such a strange idea, this robot does a pretty good job at it. It can serve up to four tables at once which is impressive if you compare it to the average restaurant server guy.

Other than customers being kept safe from corona virus, the manager at the restaurant stated that they were quite happy to be served by the robot. They found it a unique and interesting experience. The robot has been at work from the start of this month and it looks like it is there to stay.

Restaurants in Korea and around the world are slowly opening up as we slowly get back to life as we knew it before COVID-19. There are plans to have other restaurants try use robots as servers too over the course of the year. The corporation behind these robot hopes to unveil a second model of a robot like Aglio Kim next year and we’ll definitely be waiting to see how that goes.